I know how much money I have. (Well, sort of, given market swings!) I don’t know how much time I have. Looking at time as my most valuable resource is not a new idea to me. However, it popped up somewhere in my social media feed in the last week, just as I was having an opportunity to put it into practice in context of launching Dancing the Tightrope. Ironically, I’m going all the way back to my first book The Delicate Art, Learn to Say No and Unleash Your Performance.

I discovered that I was living with a big, old SHOULD in my life about what a book launch should look like. (Chapter 3, The Shouldy Yes) Every morning, I watch CBS Mornings, where at least a couple of times a week, they sit down with an author who is publishing a new book. One of my favorite lines from one of those authors was William Shatner, who I watched ride his reining horse in competition a few months ago at age 91. When they asked him for parting words, he said “Buy my next book.”

While I don’t pretend to think that CBS Mornings is going to invite me to talk about Dancing the Tightrope, I did have the opportunity to work with a media company to get me booked on podcasts, local media and print in a sort of “book tour”. When I saw just how many bookings they could get for me, I rejoiced – at first. Then I realized that very few of the bookings would fit in another category of yes I describe in Chapter 3 of The Delicate Art as a “hell yes”. This might sound crazy, but I decided I would rather have a great quality of life than to sell tons of books. That’s not to say I don’t want the people who need my book to find it.

Several of the people who needed to find my book found it this weekend at one of the MOST amazing conferences I’ve ever been to in my life. You might remember that in 2020, I had Warwick Schiller on my podcast, and then in 2021, I was a guest on his podcast. This weekend, he held the first ever Journey On Podcast Summit in San Antonio, Texas, bringing together 22 of his guests to present to 250 participants. (And I got to go as a participant!) There were several highlights over the weekend. I got to meet another of my podcast guests in person, Nahshon Cook. He had several “drop the mic” moments in his talk and in his panel discussion. 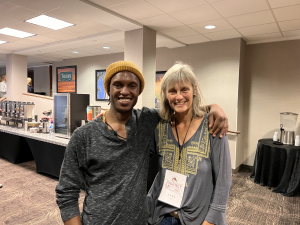 But here’s the thing. Every single presenter had drop the mic moments. Something very unusual happened in this conference. Even though every presenter offers their training and bodywork services to people with horses, they did not compete with each other. They elevated each other. I have to say, after I saw the first two or three presenters go, I thought to myself “I would hate to have to follow that.” (And to be truthful, I also thought “How am I going to sit through 22 presentations?”) I’ve done a LOT of hotel conferences. Even the good ones get boring pretty quickly. Yet, in my 40 years of attending such conferences, I’ve never felt so engaged and uplifted as I did in those three days.

As I spoke with other participants, who shared my initial skepticism, we came to the conclusion that it’s impossible to be boring when you offer your message in the way only you can offer it. If we were to boil down the 22 messages, they were dang near identical. All were answering some version of this question “How can I be the best human for my horses?” And while the answers were similar, each were enlivened with the unique spark of that speaker.

Warwick and his wife Robyn (also a guest on my podcast), held the space in this conference for everyone to shine. As they have each been on their respective journeys to understand how to be better humans for their horses, they are also wonderful humans for other humans. If you are one of the early readers of Dancing the Tightrope, you know that Warwick was one of the “village” that helped me get back on the horse, so it was super exciting for me to be able to hand him the first copy of the book. 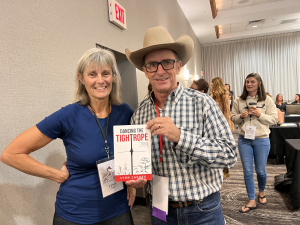 Now, what does all of this have to do with how much time I have, and whether or not I’m going to do a “book tour.” So I’m going to follow my own guidance and be very picky with my time. I’m only going to do “hell yes” events. One of those is coming up in early December, at the Equus Film and Arts Festival, where both my book and podcast with Bruce Anderson have been entered in the competition. And Bruce and I are going to do a demo each day on the topic of Dancing the Tightrope Between Horsemanship and Natural Humanship. After that, we will see.

In the meantime, I’m trusting that readers of the book will gain “several nuggets of wisdom to use in my professional and personal life” as one of my early readers said and decide to pass the book on. It’s for anyone who would like to “get back on the horse”, either literally or figuratively.

If you happen to be one of the early readers (I know – it’s only been out a week!) and have opinions, I would love to hear them!

By the way, if you are curious about this conference that captivated me for three full days, they recorded it as a livestream and are offering it here. If your first thought is “I’m not a horse person”, this wasn’t a horse conference. This was a “come out from behind your walls to be the best human possible conference.”