“Who says that?” I asked. After all, she is a grown ass woman who really doesn’t have anyone she has to answer to.

As it often does, the answer to the question came out of her past. She had adopted the rules of her parents and teachers– just like we all do. The problem is that we pack those rules in our bags when we leave home and forget to reexamine them when we become responsible for our own lives.

“It’s like you have a Sanctioner living in your head, telling when it’s ok to play, how to do your work and making sure you follow all the rules,” I said. Of course, Sanctioner is a made up word – but it comes from the word sanction.

The dictionary has two definitions for “sanction.”

So much of what we say to ourselves – and what we are willing to do or not do –comes from carrying the voices of our past as if they are real.

The other day, I was finishing a watercolor and to get an effect I wanted, I used some gouache instead of pure transparent watercolors. It worked beautifully. Until The Sanctioner showed up.

One of my original art teachers started screaming in my head that “You never use gouache in watercolor! Now you’ve done it. You’ve gone and tainted the piece. It’s not a real watercolor now.”

Even though imagined, those words felt as real as if she were in the room. It almost felt like a betrayal, even though she actually would have never said it that way. And truth be told, those words were coming from ME in MY head.

Fortunately, I’ve been working on firing The Sanctioner for years. I looked at the effect I got on the piece and LOVED it. It really made the painting pop. 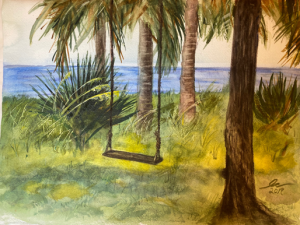 ​Rather than get caught up in the guilt of having broken a rule of watercolor, I relished in the outcome. I saw that nonsense for what it was and let it go. I’m framing that painting today!

We all have a Sanctioner in our head. We also have so much more freedom and choice than we realize once we see the Sanctioner for what it is.

One of the exercises I’ve had coaching clients do is write down some of their rules for work, such as when they will take a call during another meeting, how they schedule blocks of time for deep work and how they handle email during the day. Almost to a person, they discover that the rules are running them – and if they had a choice, they would change them.

Then they discover they DO have a choice. No one has set those rules for them. Instead, when asked why they follow those rules, they say things like “I need to be liked” or “I want to be seen as responsive” or “I’m afraid I’ll be a failure if I don’t do it all.”

You are enough. And The Sanctioner is nothing but thoughts fueled by fear, run amuck.