Is Resistance a Bad Thing? Or a Good Thing?

The answer. It Depends. (Maddening, right?)

In The War of Art, Stephen Pressfield posits that resistance is a force – almost a mythical thing - that arises anytime we want to make a big change, create something new or dare to take a stand. According to Pressfield, behind every great thing that has been created, resistance had to be overcome before that great thing could be created. Pressfield is talking about our own personal resistance, which looks like self-doubt, procrastination, distraction and other means of taking us away from important work.

There’s also the resistance we experience from other people. When I was in banking, the leaders often said we needed to “overcome resistance”. There was a lot of change happening in banking, so resistance showed up a lot.

In both cases, Pressfield and the bankers (or anyone leading change) tend to see resistance as a bad thing.

My house has a very steep driveway. In the winter, I park at the top anytime we have a threat of frozen conditions. On days like that, I crave resistance; without it, I can’t get any traction.

Without resistance, I also cannot achieve strength. Every good muscle in our bodies was built through resistance. I guess there’s a reason it’s called “resistance training.”

Perhaps the same is true of all the internal strength we gain in order to build great things, whether a new company, beautiful art or the great American novel.

Resistance allows me to cultivate strength and gain traction.

However, it’s quite difficult to harvest strength and traction if I treat it like it’s a weed that must be eradicated.

It’s also possible to have too much resistance. We call those walls. And yes, sometimes, we DO have to “overcome” walls. Yet, in overcoming that wall, we can gain strength from the exercise.

In my programs, we send people out of the session with new commitments for how they plan bring new things into their lives. Of course, we must talk about resistance, because “resistance to change” is a real thing, just not necessarily a bad thing. And there is more to the story. There is also the support that follows true commitment – if only we open our eyes to see it, trust it and follow it. 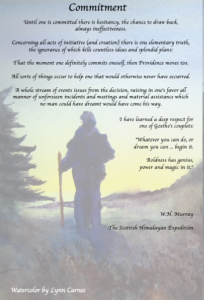 I hand out this poem while people are still excited about their new commitment. That way, when the resistance and the support show up, they are ready to use both as accelerators rather than reasons to quit.

In what ways have you harvested resistance to create strength for yourself? Where have you gotten support from unexpected places? Where have you possibly misinterpreted the signals of support for your endeavors? How can you choose to see resistance as a good thing?