We found a snake in our chicken coop recently. I was unhappy to be sure – but maybe not for the reasons you might think.

Few things scare people more than snakes. It’s an almost universal aversion that for some reason, I do not have. Instead, snakes fascinate me.

When I was a kid, my Dad would tell the story of the baby rattlesnake I found in the neighborhood. Luckily, he stopped me from picking it up and gave all the kids around a lecture about poisonous snakes and venom and how they can bite you and it’s really bad. After he finished his speech, his heart sank as I said “Can I pick it up now?”

I didn’t really understand the danger.

The snake we found in our chicken coop was a black snake. They can bite and they also emit a strong musky odor that will turn your stomach. But they won’t kill you. They will also eat all the eggs the chickens lay. These are very expensive, hard earned eggs I’m not willing to share with the wildlife! 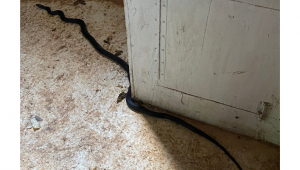 Unless it’s absolutely necessary, which means almost never, I don’t kill snakes. So I went into the coop with a broom. He cornered himself by the door of the coop where it was fairly easy for me to catch him. Keeping him contained was another matter. I tried to bag him and he got out instantly. Jen finally solved the problem with a bucket and we moved him far away from the coop. But maybe not far enough. My egg production has been down, so I now wonder if we should have moved him even farther.

Fear of snakes is a natural thing, especially on the initial reaction. Fear in general is a natural thing. It’s a great tool to keep us alive. But with snakes as with anything, we can treat them all as dangerous or we can make the distinction between the true danger and our fear. We can also make the distinction between danger and our ability to address the danger.

Driving a car can be dangerous. Cars kill over 30,000 people in the US every year. Yet I every day I drive my car and stay safe by following the rules of the road.

Right now, I’m paying attention to where my fear is on the continuum of “there is nothing to fear – there is everything to fear.” When we first encounter danger, fear is a great response. As we begin to understand that danger, we learn to live with it by developing our skills and mental tools.

Our power lies in our response.

My first reaction to walking up on a snake is still fear. I was leading a horse the other day when a big black snake crossed the trail in front of us. Fortunately, my second reaction was calm so I could easily reassure the horse that we were both just fine. We walked on with no drama.

What matters is an honest assessment of the danger along with my ability to handle the danger.