Skip to content
Note: Today I am once again waiting on the kiln to be cool enough to open and discover the magic – and perhaps the disappointments. In the last three years, I’ve made great progress in my skills – simply showing me that there is another level to now aspire to. I’m republishing this blog from February 2015 to remind me to keep learning.
Posts from Spring 2018

​Kiln opening day is always filled with anticipation. First, the big question is, “When will it be cool enough to open?” Then the bigger questions are, “What will I find?” “Did the magic occur or was it a disappointment?” and “Will I get the same results as before?”

Today’s opening was filled with a few great successes, some pretty bad glaze runs and yes, some disappointments. I always hate those.   The very thing that offers proof that I am learning deflates me.   The disappointments make me want to run and hide in doing the safe thing. They make me want to narrow my repertoire and do only what I know how to do instead of being expansive and experimental.   They are so…disappointing.

It’s just clay and glaze, and yet it’s so easy to get attached to a beautifully shaped bowl or cup only to have it fail in the final step. With perspective, I remember that this is the artist’s journey. If I made it before, I can make it again. Each step informs the next and you have to get through some bad stuff to get to the good stuff.  Still, I wish there had been more successes.

This batch was about ½ reclaimed pots. These were mostly bowls that were previous experiments yielding bland colors or less than even results. I just put a new coat or two of glaze on them figuring there was nothing to lose. And most of them turned out ok. Here’s my favorite with a before and after: 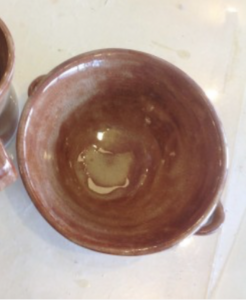 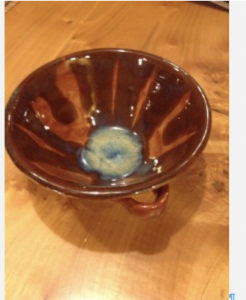 Then there were the mugs. Of the 17 that went in the kiln, only about half finished to my satisfaction. One was ruined by a severe glaze run. (Okay, remember this: When dipping, I can’t leave the mug in too long, or it will get too thick and run.) Several mugs ran either a bit or a lot. The Mystic Waters logo in several doesn’t show up the way I envisioned it. Here’s an example of a good one. 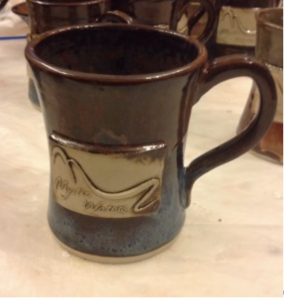 Ok breathe.  There is another load just waiting to be glazed.###

Looking at the last three and a half years of working with clay, I’ve discovered that my willingness to make mistakes is directly correlated to my growth as a potter.

Where I once measured my success by how many keepers came out of a throwing session, I’ve realized that a better yardstick might be how many failures I’m willing to tolerate.

This winter, I gave myself permission to really go for throwing tall pots (thanks to a story I will tell another day). In attempting to throw ever taller pots, so many collapsed on me that I lost count. It was hard to feel good about my skills when they appeared so lacking over and over again. Why did I keep going? Because I REALLY want to build a tall pitcher. So I continued, sometimes puzzled by why something wasn’t working, occasionally surprised when I had a tiny breakthrough and mostly toughing it out because the end goal was worth the extreme discomfort.
​
While I’ve made some progress, so far, I’ve not reached the heights I was shooting for. However, something very interesting happened when I went back to make bowls and mugs “inside my comfort zone.” Subtle improvements happened in every aspect of my throwing. Everything was more even, more centered and more uniform.

The discomfort paid off in better all-around skills. Plus I’ve achieved things I never would have without tolerating mistakes.

Could it be that toleration of mistakes is a key to growth?  I think so.

Where are you stuck in the same place because you don’t want to make a mistake? What is your tolerance level for failure? In what ways has it held you back? Have you held onto work that others should be doing because you fear them screwing it up and making you look bad?

Know someone who would love this article? Share it with them.