Miscommunication happens so frequently. As I write this, I’m still smarting from a post office encounter I wish had gone differently.

I was just leaving the post office with a pile of boxes in my arms. A local gentleman who I know more by sight than personally was moving slowly, and he started to move towards my car. My first thought when seeing him was “Wow, he has REALLY slowed down! I wonder if his health is failing.” Then he started making motions without any words that he would open my car door.

Now I need to share two very important pieces of context. First, my husband was sitting in the front seat. Second, my Doberman is usually sitting at the window of the back seat. It is not a good idea for anyone to open that back door, as Xena will go full on Doberman first, and ask questions later. (This includes family members!)

So, since he was moving very slowly and I move fast and he wasn’t saying anything, I was completely puzzled as to what was happening. Suddenly, he said “Well excuse me for trying to be helpful,” and walked off in a huff. (And oh my, how his anger gave him speed!)

It was only a few seconds later that my conscious brain finally registered that he was offering to open the door of my car to help me with my packages.

I’m sure he picked up on my unconscious thoughts of “Don’t open that door! My dog will bite you!” and the other set of unconscious thoughts to my husband of “Hey, how about opening the door and taking these packages off my hands.” But instead of understanding the mystery dog or otherwise reading my mind, it registered to him as some form of rejection – that I did not intend at all.

I was just too slow to put all the pieces together until after he was inside the post office and I was already driving away.

How often does communication get missed because someone is still putting the pieces together?

We had a “put the pieces together” moment last week during The Clarity Spark. Part of the program was doing a high-pressure activity together. Amongst the many options, including zip-lining, shooting guns, water skiing, horseback riding and adventure hiking, this group had chosen whitewater kayaking – the second most difficult activity.

At our dinner at Legends at Tryon International Equestrian Center, one of the participants realized that it was kayaking, not rafting. What?!?!!?!? I said “You followed the link, right? It described the Upper Green River Adventure as class II, III and IV in your own kayak?” Then it was “Wait? We are in our own boats? On Class IV rapids?!?!?!?”

Well yeah, because you learn more about yourself under pressure than any other time. And how you do anything is how you do everything. But – we will change to a different activity if you would rather.

After a conversation about how the link didn’t work and clearing up the assumptions and missed communication, the group re-decided to stick with the adventure. They really wanted to learn the skills of being present under pressure and how to create REAL change in their lives.

Little did we all know that the need to re-decide would continue throughout the next day. Once everyone had reconciled their minds to the real adventure (vs the one in their imagination), they still had to get themselves ready to show up.

Even getting the life jackets and helmets reminded everyone that this was going to get real. During the pre-trip briefing, we were shown how to paddle, how to get into the whitewater swimming position (hint: it’s exactly the opposite of what your mind intuitively wants to do) and how to get back in a tipped over boat. 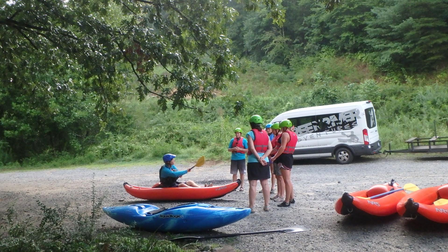 It’s at moments like this that you realize there is a HUGE difference between clear communication and embodied knowledge.

The trip guides were very clear in communicating how to handle a kayak. Now we had to get on the water and embody the knowledge. Or we would be in the whitewater swimming position for 4.5 miles in a canyon with only one way to get out.

So, we got into our boats and immediately put whatever paddling skills we had into practice. We quickly learned we had to listen to the water. We had to focus on where we wanted to go or else we were on the rocks – literally. We had to find our balance. We had to make mistakes and correct them. One of the women fell out of her boat in the first few hundred feet.

We had not been on the water very long when the guides sent us into the first eddy (rest area), where we could regroup. Interestingly, the bus driver was standing on a rock above the eddy. His presence alluded to the big decision in front of us.

Here’s what the lead guide said: “Now you’ve had a chance to get a feel for the boat and a few class II rapids. You’ve been able to see how you handle the pressure. This river goes through an inaccessible canyon for the next 4 plus miles until our take out point. Between here and there, it will be up to you to paddle your boat through the rapids ahead. This is your last chance to decide to stay or go. And remember, at the take out point, you will also have to carry your kayak .7 miles up a trail to the bus.”

This was a genuine choice with fallout either way. Whoever bailed out had to live with forever wondering what would have happened if they had gone. Whoever stayed had to show up for themselves. Because on the river, it’s just you and the boat. Yes the guides could help – but only so far.

Everyone decided to show up. It was not easy, and the fear was paralyzing for some at times. But they all showed up!

The river adventure was AMAZING. And terrifying, joy-giving, frightening, exhilarating, and so much more. You’ve never seen such happy people – after it was over. During the trip, what you would have seen were women who were scared and angry and relieved and more. Nothing will test you like a big rapid, and this river had two 15+ foot Class IV drops. The danger was real.

In the end, everyone said they strongly preferred the choice of showing up over bailing out – even though the moments on the river was extremely intense. Learning that they had that level of strength and courage solidified a embodied sense of confidence that will carry into everything they do.

The fear of the unknown was one of the biggest elements to this adventure – and to any change. We ask ourselves “Can I handle this?” “What if I can’t?” “What if I make a mistake?” “What if I completely fail?”

Any real change carries these questions and the real danger that goes with it. All too often in addressing these questions, we often mis-communicate with ourselves. We pretend we don’t care. We either overestimate our abilities or forget what we can do. We treat mistakes like they are the end of the world. We let our fear overshadow the truth.

And the truth was, every one of us made a ton of mistakes on the river. We paddled left when right would have been more effective. We dug in when a light touch would have worked. We spun backwards when forwards would have felt so much safer.

For myself, the big rapids never felt quite as scary as I anticipated. And my mind and body read that as a mistake! So, I wanted a redo – until I realized that I was in the boat, not swimming. No need to beat myself up over success! All that mattered at that point was the next moment, or I would be in the water.

Every endeavor we do is the same. It never feels the way we anticipate.

Any goal worth having is an accumulation of successes and mistakes. We get there because we keep paddling, not because we are perfect at every step.